skip to main | skip to sidebar

Future NCBA EC Meetings will be held at Guilford Bowhunters Clubhouse ..
Beginning at 10 a.m. (Unless otherwise NOTED)..
Directions below:
DIRECTIONS and MAP to GUILFORD BOWHUNTERS CLUBHOUSE
For those who have "Tom-Tom's" or similar GPS units, the address is: 6053 Rock Quarry Rd.; McLeansville, NC 27301
Take Exit #132 from I-40/I85 at Mt. Hope Church Road.
Go NORTH on Mt. Hope Church Road for 2.4 miles to intersection with Hwy. 70. Go straight across the intersection… Road name changes to McLeansville Road at this intersection.
Follow McLeansville Road approx. 2.5 miles. After you cross the railroad tracks, turn RIGHT on Frieden’s Church Road. McLeansville Shopping Center will be on your left.
Go EAST on Frieden’s Church Road for 1.6 miles.
Turn RIGHT onto Rock Quarry Road. Look for a sign that says, “McLeansville Wildlife Club.”
Guilford Bowhunters clubhouse is one-half mile down on the left at the dead-end of Rock Quarry Road.
Turn LEFT into the driveway.. Look for one big ARROW sticking up in the field on your left. (There was two, but wind blew one down.)
GPS Coordinates are: N36-07.051 ; W079-37.314 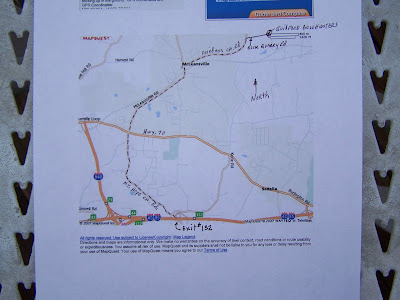 Posted by Ramon Bell at 9:41 AM No comments:

NCBA's bylaw referring to it's "Bow Policy" has been revised.
Previously, ARTICLE XII was titled, "Crossbows". This bylaw and policy was initially written 35 years ago when NCBA was first formed. Our policy on crossbows did not change over that period of time. Due to recent legislation that legalized crossbows for everyone, the NCBA Executive Council, and members, expressed the need to revise NCBA's bylaws and policy concerning this issue.

Revising our bylaws is not a simple matter that can be accomplished overnight. NCBA officers and members attending Executive Council meetings over the past year, or more, discussed this issue many times. The final draft of the proposed bylaw was included in our Fall-2010 magazine. All members were afforded the opportunity to voice opinions during this process, and all members were given the opportunity to vote on the proposed bylaw. Votes were counted at the January, 2011 Executive Council meeting, and the proposed bylaw was approved.

It is my hope that all the controversy that surrounded the wording of our previous bylaw can now be put to rest. I will emphasize though, that the NCBA is strictly a "Bowhunting" organization. We keep records of bowkills only. We don't keep records of animals taken with any weapon other than a bow and arrow, as defined by the NCBA, the Pope and Young Club, and all bowhunting organizations in North America. Crossbows are not bows, by our definition. They are a different weapon from a bow and a gun, but more like a gun (firearm)in appearance and operation. Just because they shoot a projectile that closely resembles an arrow, does not make them a bow. Our new bylaw defines in clear and certain terms what a bow is, and what it is not. NCBA will not allow other organizations or individuals to redefine our sport of bowhunting.

On the other hand, the revised bylaw no longer place restrictions on our members as to what other kinds of weapons they may own and/or hunt with. In the opinion of the majority of our E.C. members, officers and members at large who attended our council meetings to discuss this issue, all agreed that this clause should be removed from the bylaws, as we (NCBA) have no interest or business in telling individuals what types weapons they can own or hunt with. Personally, I regret that this issue wasn't addressed and resolved long ago. But, the time, the opportunity and the climate to address the issue wasn't right until this past year. We still do not believe crossbows belong in the "bow only" seasons, other than for legitimately disabled persons. We revised our policy on allowing crossbows during firearms seasons to coincide with that of the Pope and Young Club, the North American Bowhunting Coalition (NABC), and other state bowhunting organizations. Below is the revised bylaw that was approved on January 23, 2011.

1- For purposes of defining a “Bow”, the following definition has been adopted by the Pope and Young Club and all major bowhunting organizations in North America, including the North Carolina Bowhunters Association.

Definition of a Bow:
For purposes of the Pope and Young Club, and the North Carolina Bowhunters Association, a bow shall be defined as a longbow, recurve bow or compound bow that is hand-held and hand-drawn, and that has no mechanical device to enable the hunter to lock the bow at full or partial draw. Other than energy stored by the drawn bow, no device to propel the arrow will be permitted. The bow must be drawn by muscle power of the shooter alone in the presence of game, held and the arrow released by the shooter.

2- The NCBA will continue to oppose the 8/1/2010 legalization of Crossbows during the “bow only” deer seasons in North Carolina. The exception is that legitimately physically disabled/handicapped persons, as defined in N.C. General Statute § 113 296, Disabled Sportsman Program, should be allowed to hunt with crossbows during the “bow only” seasons. NCBA does not oppose use of crossbows by all hunters during any firearms deer seasons.

3- Entries into NCBA “All-Time Records System”, or any other contests, shall be taken with a bow only, as defined in section No. 1 in this Article.

4- NCBA will publish only articles, photographs and advertisements of animals taken with bows, as defined in section No. 1 in this Article.
Posted by Ramon Bell at 11:03 AM No comments: